The Princeling Carp - A short story by Ricky James 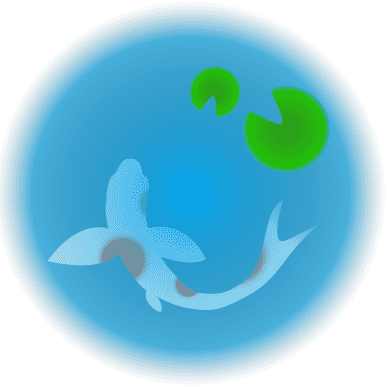 I was eleven when I saw my first carp - a white leviathan with an irregular red splotch across its brow gifted to my father by some lesser lord from the bountiful lowlands. To me, the fish seemed pompous, a self-absorbed lordling in his little kingdom of glass. The little fish swarmed to the crums but scrambled at his movement - like courtiers fleeing the artless whims of a crass young king. Indeed, his little motions carried no apparent motive - fickle lashings dished out for his own amusement at the frantic response they elicit. In his pond, no one can approach the absolute power to the princeling carp.

I remember my father anger whenever he caught me by the pond, tutors scouring the castle grounds to drag me to another lecture on statesmanship. Their robes stiff from candle smoke and bags laden with scrolls, it was no challenge to stay one step ahead of their anger. But my father was a tiger, silently stalking throught the long grass before descending on his prey with swift justice. In between the dignitaries and delegations, the treaties and trade agreements, my father always found time for a cuff around the ears and a firm rebuke. Apart from those reprimands, I would often go weeks without seeing him.

The lectures themselves seemed to fade even as they happened. Either my father’s high standards or my poor performance would drive even the most practiced tutors from our halls eventually, taking all but the most ephemeral memories of their lessons with them. If the southern merchants alliance is stockpiling rice in the springtime then of course we must sell or slaughter all but our strongest cattle by first snowfall, unless of course the east islands themselves are slaughtering their goats. These economic principles should be self-evident by now, your majesty. And yet the reasoning eluded me then and still does now. If the north is filled with hordes armed and ready to take our lands and wealth, intent on wiping our people and culture out, what then is it worth memorising the price of grain?

I can’t see the carp today - they have retreated to the ponds murky depths - and yet I know they must be down there somewhere amidst the weeds and waterlilies. They are scared, scared of noise and commotion, scared of the ash slowly covering the water surface. The fire has spread to the east wing, and the entrance hall is all but consumed. The voices rise and recede in the passageways, but here in the courtyard is relative peace. I will wait here for my father, unaware until he pounces. He will come soon, but I know there is no point anticipating him - you cannot anticipate a tiger. Like a swift arrow’s flight, smoking trailing behind, or the lightning steel of a blade concealed in an ambassador’s sleeve, the tiger strikes when you let your guard down, when you let him inside your walls, when you let the promise of peace lull you like poppy milk. I just need to be patient, and my father will come.